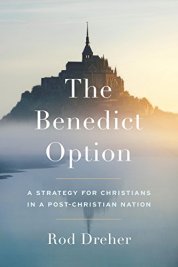 Barely a year after its public release The Benedict Option is already a book David Brooks of the New York Times calls “the most discussed and most important religious book of the decade” (2017). With themes such as separation from the world, a renewed attention to spiritual disciplines, and a “reset” of moral priorities, Dreher wrote this as a wakeup call for the present-day Church. She must, he believes, emerge from her willful ignorance about the encroachment of secular liberalism the seeks to eradicate her influence or destroy her outright.

Dreher himself describes the main argument of The Benedict Option (2017) as “an alarm” for conservative Christians in the West, warning of the danger inherent in the liberal secular order and the failure of those to understand this danger (p.235). Christians must stand firm in holy traditions and ways of thinking, speaking and acting, and pass these traditions on from generation to generation, or risk losing those things altogether. “The greatest concern is that we are at risk of losing sight of the One to whom everything in that sacred order, like a divine treasure map, points.” His solution is not reversing the political and other religious losses suffered by Christians, nor turning back the clock, nor constructing “communities of the pure” cut off from the real world. Rather, he calls the Benedict Option a call to undertake the difficult task of pulling our faith back into the reality of God’s world and Word, out of the artificialities of consumerism and technology he believes are consuming us today (p. 236).

There are several themes running through the book. One of the most frequent – and contentious – is the ark motif. “The image of the church as an Ark floating atop tempestuous waters of destruction is one of great antiquity in the history of the Christian faith. This iconic concept of the church’s self-understanding must be recovered with vigor” (p. 237). Here, like high-walled Benedictine monasteries, the church is preserving the faith at the expense of the world perishing around it. To counter this, he offers a wellspring motif. Safe from corrupt society the Church is simultaneously a source of life flowing out, envisioned both in Ezekiel’s prophecy of the restoration of the Temple in Jerusalem and the outpouring of the Holy Spirit at Pentecost. Dissatisfaction with Dreher’s ark-wellspring perspective was a common theme across the threads of fellow CLED-720 students over the past several weeks, particularly when viewed against Scripture admonishing the Church to be in the world (though not “of it”) to influence it.

Another theme is the vices of western society: Capitalism, materialism, complexity, rootless mobility, mass media and communications addictions, and the like, as well as the pervasive religious philosophy of Moralistic Therapeutic Deism. The author’s affinity for asceticism (p. 63) and the Tipi Loschi, a “particularly orthodox, counter-culture Catholic community” suggests that monastic groups are his gold standard with regard to living the pure Christian life today (p. 238) as the way to counter-act depravity. Finally, he promotes the Benedictine lectio divina, with Scripture reading, prayer, and meditation on the meaning of passages to one’s life not as bible study per se but to encounter God speaking directly (p. 58), accompanied by kneeling, sitting, standing, and prostrating to involve the whole body in prayer. If we are to live rightly ordered Christian lives, he says, “then prayer must be the basis of everything we do” (p. 59). Hard work is also added to this, in line with the Benedictine motto ora et labora (prayer and work). This restores work not as a means of acquiring things or to define ourselves, but as a sacrament reconnecting our God-given vocations with our spiritual lives, making labor an expression of love and stewardship of the community.

The main thrust of the book is that the Church must wake up and return to the basics of the faith or be destroyed by the culture. The challenge Dreher faced was balancing his affinity for monastic life and the need to be fully poured out into local communities. There are several peripheral ideas he uses to substantiate his argument. There is a balance between spiritual isolation and integration, for instance. One can attain a life that is rigorous but also free from fundamentalism and extremism (p. 73). The way of Saint Benedict is “not an escape from the real world but a way to see that world and dwell in it as it truly is” (p. 74). It is a “radical and more effective way” of approaching politics, the way Christians survived decades of Communist rule, versus the values-voter movements of the 1980’s and 1990’s. Politics is not a substitute for personal holiness, and the “Christian minority” must be a creative, loving alternative to cold secular liberalism (p. 98). It must also be smarter on Church history and apologetics and the wisdom of the original Christian writers and martyrs. Along with author James K. A. Smith (2009) he endorses liturgy as a means to restore order, structure and gravitas to expressive but formless worship styles, and yearns for church discipline and fasting. The home and family must become “domestic monasteries.” These main and subsidiary ideas bolster his thesis of an ancient monastic solution for the Church facing a 21st century culture crisis.

To arrive at this Dreher recaps the life of the Church since the time of Christ, through the Dark Ages, the descent of western society since the Renaissance, and into the present-day situation. This tidy summary of history is one reason for the book’s popularity. Others such as Anthony and Benson (2011) have examined this period more thoroughly but Dreher covers enough to reinforce his argument that the present socio-religious milieu is a long time in coming. In fact, one of his strongest arguments for the Benedictine model is that the Order has stood the test of time (p. 53). Still, there are some points where evangelicals disagree. He uncritically accepts the evolution of man (p. 53). The Rule may appear legalistic, though he denies this (p. 51). Dreher’s attention to the past seven centuries of Church division culminating with Luther’s Reformation ignores two millennia of internecine squabbles in the Roman and Orthodox Church. His suggestion that liturgy is the antidote for feelings-based worship is somewhat contrary to evidence that churches with contemporary formats are largely conservative and thriving while main-line liturgical churches have largely succumbed to the liberalism he wants to defend against, though Kinnaman suggest this trend may be reversing (2018). Dreher also seems to view the Church through the lens of the I-5 and I-95 corridors, ignoring communities of faith living within America’s heartlands. Perhaps he might consider these along with his romantic visions of isolated Italian villages.

That aside, Dreher roughly captures the state of Christianity and the secular West today. While one might disagree with the remedy, he agrees with what many Christians see as the illness. Institutions like marriage, parenting, civil order, honor for authority, integrity in business and personal affairs, and common courtesies all evaporating while the Church becomes “chaplaincy to the consumerist culture” (p. 2). His cites Romans, “Now is the hour for us to rise from sleep” (v.13:11) and Paul’s admonishment to die to self (v. 6:9) as reinforcements that God does not intend for the Church to slouch its way to the Rapture. Orthodoxy raised by The Rule is substantiated by Apostles Paul (1 Tim 4:7) and Peter (2 Pet 1:5-8) with regard to the call to discipline ourselves for the purpose of Godliness in Christ Jesus. Dreher’s is a timely message indeed, and worth considering.

One would expect an outspoken conservative like Dreher to have both critics and fans. John Jalsevac (2017) declares the Benedict Option a hoax, since, as it turns out, the Option is simply re-packaging the essentials of Christian living. Steve Thorngate (2017) wonders who the Benedict Option is written for and is disappointed the message is not more evangelical. The same James K.A. Smith calls this the New Alarmism in Christian literature. “These are books intended for choirs: they are written to confirm biases, not change minds.” However, the “Desiring the Kingdom” author ignores their common ground such as the importance of liturgy, as noted above, and fellow journalists Charles Chaput (2017) and Mark Bauerlein (2017) defend Dreher against what Bauerlein calls Smith’s “cheap shot” on the alarmism accusation. Lastly, Bethany Mandel (2017) argues that Dreher’s Benedictine solution is one the Jewish community has been experienced with (i.e. operating independently of society’s boundaries) for thousands of years. In discussion boards among Liberty Online CLED-720 students, the consensus was agreement with (and appreciation for) the analysis of historic and present-day culture, with the most debate centered on whether monasticism and ascetism was a suitable approach for Christians in culture.

Dreher vs D. A. Carson

In Christ and Culture Revisited, D. A. Carson (2008) offers his own synopsis of the current culture and how we arrived at it, particularly focusing in on Niebuhr’s five models for Christian vs cultural engagement (Christ against, of, above, in paradox with, and the transformer of culture), but also plowing some of the same ground with respect to the state of postmodern culture, secularism, democracy, and the role of the state. Carson would likely suggest Dreher advocates neither swimming with or against cultural currents, in terms of whether a Christian should influence society by affiliation or opposition by various means, but rather that the Church get out of the water altogether, her greatest influence being to alter the course of the river itself. Another Carson complaint might be that given the wide possibilities examined by Niebuhr and others since, the Benedictine option is too simplistic a solution. However, since Carson himself offers “Christ in Culture in Paradox” dualism as a reasonable model preferred by Augustine (p. 24), Kierkegaard (p. 25), Luther (p. 24) and St. Paul, he might approve with Dreher’s statement that “The Christian call is a paradox: We are called to be in the world but not of the world” (Dreher, p 65). Finally, Carson rightly points out that sin clings both to the culture and the pious. This would make Dreher’s hypothesis even more suspect except for the fact that God has chosen sinners saved by grace to carry out such a great commission regardless of their location.

The world is a mess. The Body of Christ faces existential threats from everything from bulldozers to liberal judges to complacency. Yet beyond the extraordinary technology that exists today, these are not significantly different from what Christianity faced in Ancient Sodom or 1st or 14th century Rome, or what the Apostle John describes as the challenges of the Seven Churches of the Apocalypse.

The Church has been blessed time and again by those who would labor to take her by the shoulders and remind her of her First Love. As a counter-cultural personality Dreher has once again deftly placed himself at a unique point in the endless debate about the proper and effective role of the Church in impacting the world for Christ. Whether the environmental debate and “Crunchy Cons” a decade ago or the argument against western materialism and cultural rot today, the Church has needed his reminders.

Jalsevac, J. (2017). Turns out ‘the benedict option’ is a hoax. Retrieved from https://www.lifesitenews.com/blogs/turns-out-the-benedict-option-is-a-hoax

Kinnaman, D. (2018). How liturgical are today’s Christians? Retrieved from https://www.barna.com/research/liturgical-todays-christians/

Smith, J. (2017). The new alarmism: How some Christians are stoking fear rather than hope.

Thorngate, S. (2017). Who is the benedict option for? Retrieved from